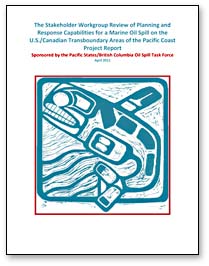 The shared waters between US and Canada are an important focus of the Task Force’s work in oil spill prevention, preparedness and response. Since the organization was formed, the Alaska-British Columbia (CANUSDIX) and Washington-British Columbia (CANUSPAC) boundaries have been the focus of our transboundary coordination and planning efforts. The Task Force serves as a nexus for exchange of information and fosters collaboration, as members from both sides of the boarders participate on numerous workgroups, projects and forums.

Transboundary Project
In 2011, the Task Force released a report entitled “The Stakeholder Workgroup Review of Planning and Response Capabilities for a Marine Oil Spill on the U.S./Canadian Transboundary Areas of the Pacific Coast Project Report”. This report provided over 130 recommendations for improving oil spill preparedness and response in the transboundary region. The report can be found here (pdf, 3.3MB).
In 2016, the Task Force launched a 5-year review of the Transboundary report, specifically the status of the implementation of the recommendations. A summary of the 5-year review was released on October 2nd 2017, and is available here.